skip to main | skip to sidebar

At midnight last night we decided to begin our anniversary celebrations. Today is our 2 year, 'Cotton Anniversary'.

As you know, I haven't been buying anything new this year, but am allowed to get supplies for do-it-yourself projects.  So I thought the floppy hat thing was going to be a perfect gift, thematically appropriate; labour intensive and loving enough.  As you can see by the photo where I am modeling the hat, (taken after soaking it in 4 kettles of boiling water and drying it on high for 2 hours), it is still big enough to be a toilet seat cover.  I will be making another hat for my wife, but I need to get a lesson in what went wrong.  I know our heads aren't that small.  I may use it for a thinking cap.  Inspiration and plenty of room for brain growth. 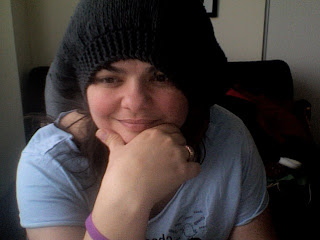 I scrambled for another cotton gift, and decided to make a pillow with a couple of old favourite t-shirts.  One side is from a t-shirt that we got on our honeymoon that is like an old tattoo that says 'Love is all', the other side of the pillow is from the first 'Cheap Queers' show my wife took me to.  It's an outrageous, annual comedy and anything goes show during Pride Week.  The cost is kept ridiculously low (I think the tickets were $6.49) and they make shirts that they stamp their this-year's-logo on, from a pile culled from thrift stores.  Actually 'Cheap Queers' is also thematically appropriate to me not spending a lot this year.  I even got some buttons that looked like old fashioned tattoos.  Dawn used images of old tattoos as inspiration when making decorations for our wedding way back two years ago. 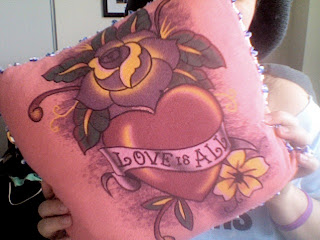 So that was my cotton part, and then I wanted to do something else but one of my high tech creative projects is 'stalled in post-production'.  A fancy way of me saying I need to haul my butt out and get a tutorial from someone other that my wife so it can be a treat for her.  I ended up making a funny, not so complicated animation video for her (from a website).  Since I'm not buying anything, I chose the only two 'free' characters from the human-looking options.  They happened to be one male and one female.  They were sitting at an anchor desk, and I thought that was kind of cool, since hey, our wedding might be considered 'newsworthy' on our anniversary.

(Speaking of Newsworthy, here's a little article from the Toronto Star about our wedding.  There are a couple of errors, as in it was my first foray into online dating, and my dress had a gold thread, but the warmth and gist of it were very sweet.)

Back to my animation debut: I gave both my cartoon characters female British accents, since my wife loves a British Lady Voice.  And then I created an animated video of our wedding vows.  It gets better.  The day before the big reveal, I showed it to my twin sister, since I was so proud. With some surprise, she asked me why I chose Larry King's signature stage set, and picked Larry King and Sarah Palin to 'read' our vows.  As you might gather, I don't watch much News TV.  She pulled up Larry King's show on the television, and sure enough, it looks just like it's cartoon version.  The video of our vows is almost 4 minutes in length, and it was pretty hysterical to watch Larry and Sarah mouth our words like Girlish British Robots.  But, I guess in truth, if I'd realized that's who they were, I'd probably have gone with the bunny and cat characters. But it got a good laugh, and my wife cracked up, especially about the fact that I didn't even realize who I was 'casting'.

I gave Dawn my homemade gifts first and she was suitably delighted. She went last; I'd sensed her gift might be 'bigger' than mine and thought some dramatic waiting and build-up was in order.

Dawn was clearly chomping at the bit to show me her gift.  She kept asking, 'Are you sure you don't know what I got you?'  And I genuinely did not have a clue.  (The real tattoo is not reversed as in the pic below, but after trying to make it work forever, I decided to go with this so it could get posted while it's still our anniversary) 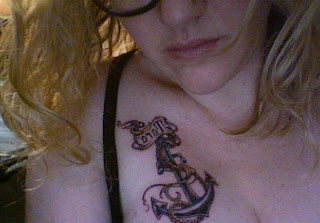 Tonight she has an audition and a show, and we will revisit the site of our first date afterwards to toast our  marriage and inspired courtship.

So happy anniversary to me and she.
xo Tara

p.s.: No Spend Week starts on Wednesday, so I (and my fellow participants) have two shopping days to get sorted for that.
Posted by No New is Good News at 4:16 PM

Happy anniversary! Is there any way to take in the cap by sewing a seam into it?

No New is Good News
This blog began as a spot for me to talk about my year of not buying anything new (2010). It was a great year! Now it is 2019 and time for me to revisit a 'no new' year for all kinds of reasons. My twin and I are turning 50 this year in May, and I am pushing financial and minimalism #squadgoals for this milestone year. I like the thought of being less tied to lifestyle and having more elbow room. I like to make projects out of my goals both fun ones and hard work ones. Thanks for checking it out!